One of the things we pride ourselves on is knowing that fitness is personal. We want to inspire ALL women, REAL women, to either find fitness, expand their health, fitness and nutrition knowledge or push their current regime to the next level. However, understanding that fitness is personal means that we also acknowledge that everyone’s journey is different and that some journeys have been much more of a struggle than others

Approximately 1.25 million people in the UK have an eating disorder.

Emele, 18, is a brand ambassador for IdealFit and has recently shared her story of how she found fitness. Emele’s story is not only inspiring but incredibly motivating and possibly for some of you reading this, is surprisingly relatable. Emele has battled through anorexia, a very serious eating disorder, and come out the other side. We literally couldn’t be more proud to have her representing the brand and couldn’t be more grateful that she is willing to share her journey with us.

Q. Hey Emele! So nice to meet you and thank you for sharing your story with us! Firstly, tell us a little bit more about yourself.

Hey Sophie! Lovely to meet you! I’m 18 years old and am living in Ireland. I’m currently in my final year of secondary school and am hoping to study sport and exercise science in the UK afterwards! One of my biggest passions is strength training, I absolutely love it and I truly believe it was one of the major factors that led me away from my eating disorder. In my spare time, I run my Instagram @emgainstrength I use this platform to share my advice and use the power I have to spread awareness and help those with eating disorders.

Q. Tell us a little bit about how life was before. Did you class yourself as having an ‘eating disorder’ and were you aware that what you were doing wasn’t healthy?

My dad passed away back in June 2014. It was such a shock and I didn’t really know what to do with myself. He was the chef of the house and had always done the cooking, so when he was gone my mum didn’t take over. I began cooking for myself and as it was sort of a ‘new chapter’,  I decided to become a more healthy version of myself. I began going on long walks, walking to the supermarket and buying healthy alternatives. I also became a vegetarian as I assumed it was a better thing to do for myself. As time passed I began to gather little rituals, which I ensured I always did. At this time it was nothing more than just me trying to be healthy.

In August I went to Italy with my friend and her family. They noticed some of my weight loss and how my eating habits had changed. When I was back I realised that if I continued, people may try to stop me, which is when it all began to become more secretive and I unknowingly began to develop an eating disorder.

Q. Was there something in particular that made you very self-conscious about your appearance and led to your eating disorder?

My body had never been something that I was fussed about. I was healthy and had what I thought was a nice figure. There was a time when I was in a bikini which I vividly remember and someone I knew pointed out my cellulite on the top of my legs. This stuck with me and triggered some thoughts of “oh maybe I should lose weight” as nobody had ever criticised my body before. 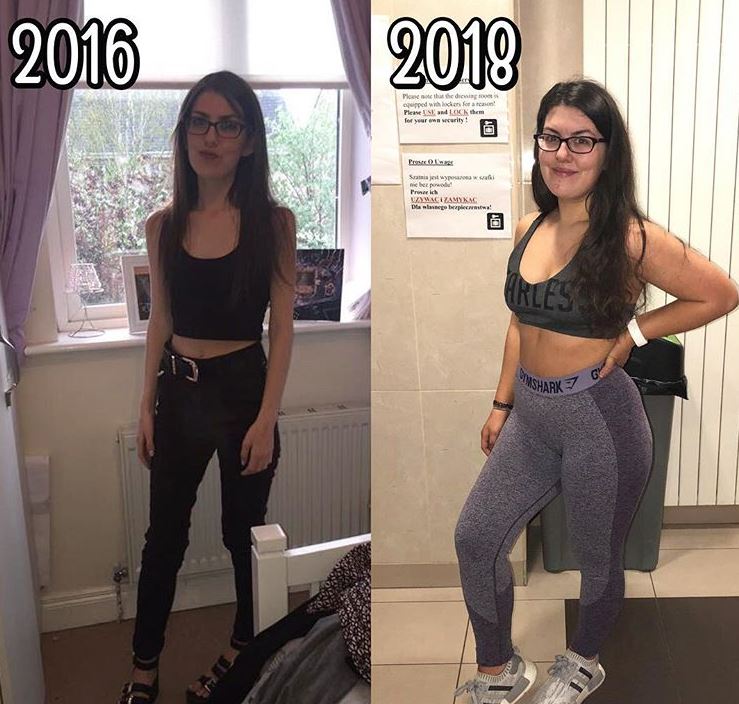 Q. What sort of behaviors did you demonstrate when you were unwell?

Day-to-day I had particular rituals which my head “made” me do. For example, if I couldn’t eat dinner at a particular time or have one of my meals I had planned, an overwhelming blanket of guilt came upon me which in return would tell me not to eat as a punishment, simply because I couldn’t eat in the time I had planned.

Q. What did a typical day feel like before? What did you eat and did you workout at all?

I think it’s stereotypically thought that all anorexics just don’t eat, and in fact, it’s different for everyone. I ate extremely high volume, low-calorie foods, 3 times a day. The reason I did it this way was that firstly I wouldn’t physically be too hungry and also to trick people into wondering why I was getting smaller despite eating so much. Realistically I was eating no more than 200 calories a day.

I didn’t work out at all, which sometimes made me feel “invalid”. When surrounded by professionals, even they assume all anorexic people do the same things, which almost felt like I should try getting worse to prove them wrong before starting to get better. My energy levels were so low. I felt almost like a robot, doing only what I needed to do. Prepping my meals felt like what it feels like doing a full-on training session right now feels like. One of the reasons I reached out for help near the end was because of my lack of energy – it was painful.

Q. Were you happy before?

Thinking back on it now, I wasn’t happy before. But before my dad passed away nobody really understood why I could be unhappy. I do think a slight element of my eating disorder was some sort of cry for help. Despite the obvious battle each day, I learned so much from recovery. From my own body, from what people told me, and how I could push it beyond the extreme and it would fight to keep going. It also majorly opened my eyes to the people I had around me, and although I, of course, would never intentionally go that way about it, I don’t think I would’ve realised that without becoming ill.

Q. Did you know that you needed help or were you totally unaware of the damage you were doing to your body?

I knew I needed help and in fact, I was the one who asked to see a doctor before anyone suggested it (at this point I was just 27kg). My hair was falling out more and more each day – I’d find hair EVERYWHERE. I’d struggle going up the stairs, which wasn’t ideal for being in a school with 3 different floors. My period had completely stopped and I felt like a different person to who I ever had ever been before.

I was freezing, oh gosh the COLD – I think the cold was the worst of it all. My lack of body fat combined with zero energy to keep myself warm resulted in being indescribably cold. It was again the unbearable cold that led me to scald myself nearly every night with a hot water bottle, to still only feel cold. I’ve never spoken about this before, but, I didn’t shower a lot. I couldn’t bear it, the thought alone of showering almost gave me hypothermia. Although, I was so dehydrated that I had nothing to sweat out anyway so showering wasn’t a huge issue. For about a year and a half after I came out of hospital, I had a genuine fear of the cold in case it was as painful as it once was.

Q. Were you very ill with your anorexia? What was the worst thing that happened while you were going through it?

I was very ill, but I still can’t admit that properly to this day. I spoke with one of my friends who is actually in an inpatient unit at the moment for the same thing about how you never feel ill enough. As bizarre as it may sound for people without an eating disorder, you just want to be sicker and sicker. But in reality, the iller you got, the longing to just to be worse didn’t go away.

So much happened but there is one specific event I do remember when I was rushed to A&E. One of the nurses checked my blood sugar levels which turned out to be dangerously low. I was told I would go into a coma if I didn’t eat something sugary to spike them back up. I was SO incredibly terrified of sugar, that I screamed over a sip of lemonade – I was mental!  I will never forget my mum’s face as she watched her 15-year old daughter screaming her lungs out in protest with the preference of a possible coma rather than having a few sips of lemonade.

Q. How did you feel about the way you looked?

At my worst physically, I knew I was tiny, but my head told me I wasn’t tiny enough. The moment I realised I couldn’t do it anymore was when I became genuinely freaked out by how prominent my tailbone was and that’s when I reached out for help. The things that came with being so small were flaky skin, which was so dry no matter how much I slathered myself in moisturiser and my hair was so, so thin. All for the sake of being tiny. 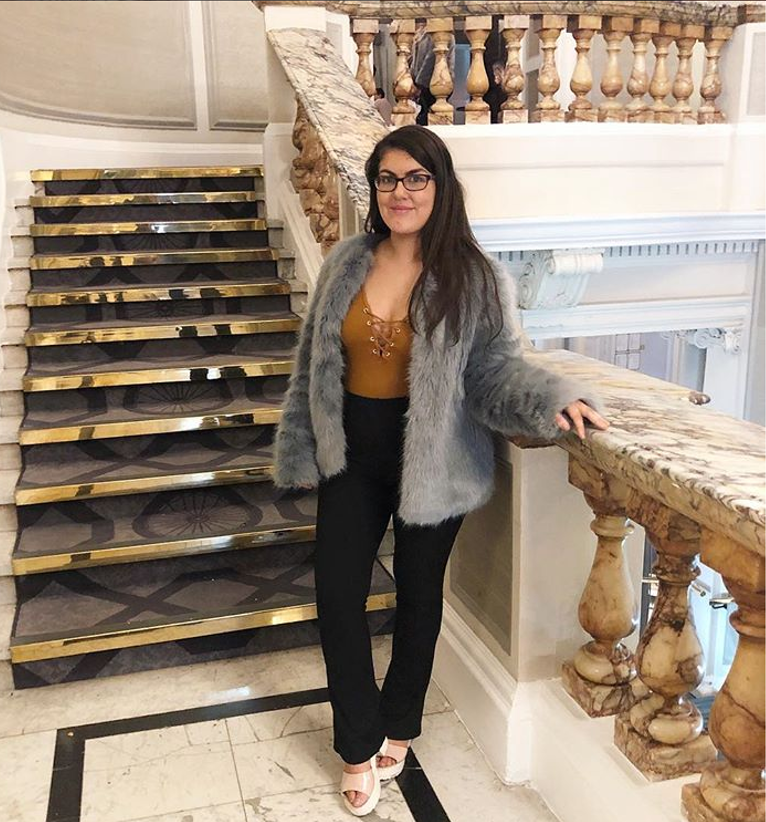 Q. What changed and made you decide that you wanted to get healthy?

It took about two years after being discharged as an inpatient for me to decide I wanted to be healthy. After a major relapse, which went unnoticed as I had become so good at hiding things, I fell into binging. This was my body’s cry for food as it could not go on with such a lack of energy for any longer. I’d tell myself every day “okay I’ll just eat normally now” and begin a day either restricting or eating healthily and that night binge again, and the cycle would go on.

Q. How did you do it? Did you have support/what did you find helped?

I was lucky enough to receive help from the mental health services (CAMHS). I had weekly outpatient appointments at my clinic which I didn’t appreciate when I was so deep into my eating disorder. My anorexia was so strong that I would fight against professionals who were just doing their job and trying to help. At this point, I didn’t want to get better and the one thing I came to learn was that you won’t get 100% better unless YOU want to do it. Once I realised I wanted to get help, I gained control over my eating disorder.

After overcoming her eating disorder, Emele found fitness and has never looked back. Through healthy eating, a fitness regime which involves lots of strength work, she now enjoys an active and healthy lifestyle, something she never thought she would be able to do.

Read the rest of Emele’s story and how she found fitness after her recovery here.

Hear from our inspirational ambassador about her journey to fitness after her recovery from a serious eating disorder.

From CrossFit Beginner to RX: How I got into Functional Fitness

Are Fats REALLY Healthy? | Which Healthy Fats Can Help You Lose Weight!

How To Tone your Arms Without Using Weights